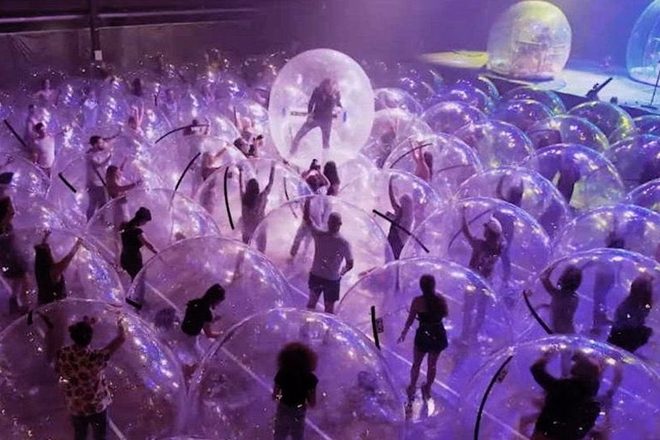 Live shows as we know them haven’t happened for a long time, but that didn’t deter band The Flaming Lips from throwing one where the audience were in ‘space bubbles’.

The Flaming Lips played a show at Criterion in Oklahoma City, where 100 inflatable balls – or ‘space bubbles’ – housed the people in attendance in order to achieve social distancing. Up to three people could fit in a bubble, while each band member performed in their own on stage. At one point, frontman Wayne Coyne ran over a bunch of bubbles to perform in the middle of the crowd.

Each bubble had their own speaker, a water bottle, a battery-powered fan, a towel and a sign to let staff know when they needed to go toilet. Staff then collected them and escorted them to the loo.

It’s not a first for Coyne. He usually gets in a bubble himself when concerts are happening normally. That was the inspiration for the gigs, which took place on January 22 and 23. They were originally due to take place in December but a spike in COVID-19 cases meant they were postponed.

Nathan Pope filmed the gigs and tweeted some images before the show to show the setup.

I’m running three cameras at the world’s first space bubble concert with the #FlamingLips in downtown Oklahoma City. The show is starting in about half an hour. pic.twitter.com/ManULyjpCU

Licensed gigs, concerts, shows and parties have been almost non-existent since the coronavirus hit, but there has been a few socially distanced events. The UK’s first one took place last August in Newcastle – where groups of people watched from their own platform. Patrick Topping also played a socially distanced event at the same 2500-capacity venue.

Read this next: “Absolutely not a rave”: We partied outdoors in the ‘new normal’ of coronavirus

Germans came up with creative ways of socially distant partying, including one club night in Münster and drive-in raves in Schüttorf and World Club Dome in Düsseldorf. And of course, people have found ways to party online.

Watch footage of The Flaming Lips’ gig below.