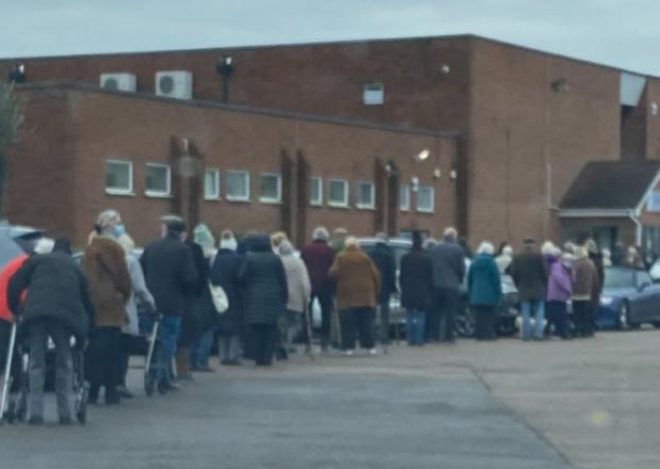 Police in Essex made a mistake recently when they turned up to what they thought was an illegal rave, but was actually pensioners queueing up to get their COVID-19 vaccine.

Having seen a large group of people outside the Essex Freemasons’ Saxon Hall in Southend – where vaccines were being given – somebody called the police warning them of a “rave“.

Pensioners were in place of pingers and rave-friendly tunes, though, when the blues and twos showed up. A bunch of OAPs were merely in line outside the building to get their jab, which was hit with a delay when the vaccines turned up late.

Read this next: £800 fine introduced for people going to house parties

The Saxon Hall chairman, Dennis Baum, said: “It was really funny when the police arrived as they had been notified that there was a “rave” taking place at Saxon Hall – only to find 80 and 90 year-olds on wheelchairs, zimmer frames and walking sticks, patiently queueing for their vaccinations.

“Grumpy old men and grumpy old women were in abundance. Nevertheless, as a balancing act many more very appreciative people couldn’t have been more grateful to receive the vaccine and to Saxon Hall and the Freemasons for facilitating it.”

The Hall was expecting the Astra-Zeneca vaccine on the day, but it was the Pfizer one that arrived at a later than scheduled time of 9.10am, with less doses than needed. This led to car congestion reminiscent of raves back in the early ’90s.

Baum added: “So the congestion commenced, and then got worse when they ran out of vaccine and there was an hour’s delay in getting more. It was absolute chaos and very cold. The car park became choc-a-bloc with 80 year-old-plus drivers.”

Read this next: More than 2,500 people broke curfew to attend an illegal rave in France

Having been foiled by the report of a rave, Essex Police used the opportunity to praise their quick response to the call.

“As the good public of Essex know, where we receive reports of people clearly and flagrantly breaking the rules we will respond, but we’re also available to help the community when needed.

“Upon receiving reports of congestion at the vaccination centre, a unit responded to offer help with traffic management, and returned later that day to check that everything was progressing smoothly for those getting their jabs.

“No-one wants to see all of our communities getting the jab and being protected more than us at Essex Police, particularly our elderly and vulnerable communities and we will do all we can to support that.”

It’s no surprise they were so quick to respond, bearing in mind how many actual unlicensed raves have taken place in the last year. There was one in the village of Margaretting, Essex – around a 30-minute drive from Southend – in June last year with 400 people there.