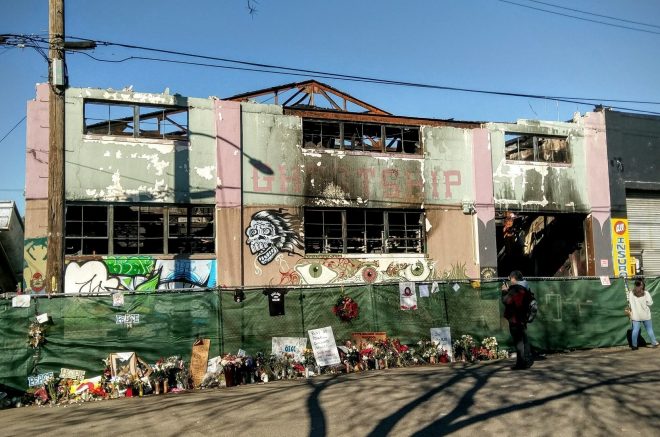 Derick Almena, the master tenant and leaseholder of the Ghost Ship warehouse where a fire killed 36 people in 2016, has pleaded guilty to 36 counts of involuntary manslaughter.

The 50-year-old man will reportedly be given a prison sentence of between nine to 12 years when he is sentenced on March 8. It is expected he will not return to jail after being released on bail last year, due to being credited for time already served and good behaviour, which could allow him to serve the remainder of his sentence at home with an ankle bracelet.

Almena, who lived inside the warehouse and according to court documents “substantially increased the risk to those living, working or visiting the building by storing enormous amounts of flammable material inside the warehouse”, was arrested and charged with 36 counts of manslaughter in 2017 alongside Ghost Ship creative director Max Harris.

The building’s owner Chor Ng, who was paid $3.1 million in insurance as a result of the fire destroying the property, avoided prosecution.

Almena and Harris both pleaded not guilty to the charges in 2017, prior to going on trial in 2019, each facing up to 39 years in prison if found guilty.

Max Harris was found not guilty of all charges, but in the case of Almena, a mistrial was declared after the jury could not reach a verdict.

Now Almena has entered a plea in the Alameda County Superior Court, which will mean he avoids a second trial.

Mary Alexander, a lawyer representing the families of 13 victims of the fire, told the New York Times that the families are infuriated by the plea agreement which she said will allow Almena to avoid additional jail time.

Almena served around three years in prison in between his arrest in 2017 and release on bail last year.

Despite the reported nine to 12 year sentence Almena will be handed, Mary Alexander said prosecutors told her that Almena will likely not return to prison, serving around a year and few months at home with an ankle bracelet, after which time he will be expected to complete three years of probation.

Mary Alexander said: “This is really a crushing blow for the families. It’s not enough time behind bars. They feel like it’s not justice and they’re not holding him accountable for killing 36 beautiful young people.”

Colleen Dolan, mother of Chelsea Faith Dolan aka 100% Silk affiliated artist Cherushii who died in the Ghost Ship fire, said the plea allowing Almena to serve out his sentence outside of prison is not fair. “We’ve all been sitting at home. We’ve all been living in isolation for a year. And this is supposed to be justice? It just isn’t,” she said.